Slingshot Sports has been a leader and innovator in the kiteboarding industry from day one, which traces back to 1999, in the action sports mecca affectionately known as The Gorge. Brothers Jeff and Tony Logosz founded the brand at a time when kiteboarding was just in its infancy, reserved for athletes willing to take a beating and be the test dummies for early-era gear. Slingshot built a reputation early on as an edgy brand willing to take the lead and take risks to succeed in its goal of constant progression and innovation. Over the years, Slingshot has remained a pivotal player in the kiteboarding industry, both in the technical innovations they pioneered and in the athletes they fostered as they pushed the sport to new limits. The Logosz brothers remain at the helm of Slingshot today – Jeff as the CEO and Tony as the lead designer – and although it is one of top kiteboarding brands in the world, the company has maintained a family-run atmosphere and remains located in the same small town where it all began.

Slingshot headquarters is located in Hood River, Oregon, in an airy office overlooking what is commonly known as the birthplace of kiteboarding. Located in the Pacific Northwest just east of Portland, the Columbia River Gorge is a natural wind tunnel that creates some of the strongest and steadiest summer winds on the planet. Hood River is a genuine epicenter for the sport, and having the world’s greatest testing grounds just a stone’s throw away from the headquarters is an invaluable asset to Slingshot’s R&D process. There’s really no better place on earth to test the bomber, high-performance gear Slingshot has built its reputation around. Additionally, just a short drive from their headquarters is Slingshot’s twin tip factory, where all of the brand’s wood-core kite and wakeboards are manufactured. Having this factory so close to home gives Slingshot almost immediate turnaround for R&D. They can design a board in the morning, have it built by lunch and be testing it on the water that same evening. There’s really no substitute for that level of control and intimacy with the process.

Slingshot is generally always working on something new and exciting. For 2016, one of the developments they’re most excited about is a new foil program they are rolling out called Foiling Flight School. This program is the first of its kind in kiteboarding and features three supplemental masts of varying lengths that can be changed-out as a beginner foiler builds skills and confidence. Much like starting with a small kite to learn the basics, Foiling Flight School allows newcomers to start with a short mast, then increase in length as they improve. Slingshot claim this program will make foiling accessible to more people and will take much of the pain, frustration and intimidation out of the learning process.

Slingshot is also excited about the ever-evolving lineup of team riders they’ve enlisted to carry the Slingshot torch. In early 2016 they announced the return of Youri Zoon to Slingshot’s international team, and to the kite that he won two world titles on – the RPM. Combine Zoon with the likes of their dynamic Brazilian prodigy Carlos Mario, wave guru Patrick Rebstock, park specialist Sam Light and amazing female shredder Karolina Winkowska and they’ve certainly got a lineup worth writing home about. Undoubtedly it’s going to be an exciting year for Slingshot… 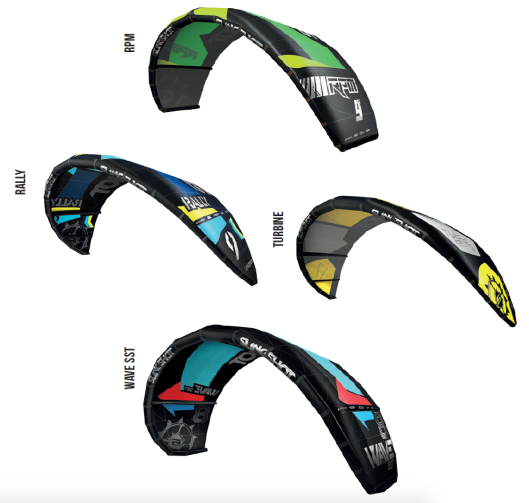 The most versatile and user-friendly kite in Slingshot’s lineup, the Rally has continued its dramatic rise to the top since introduced to the market in 2011. Available in sizes 5-12 and 14 so kiters can build their perfect quiver, the 2016 Slingshot Rally incorporates an open Delta-C profile, a direct-connect pulley-less bridle system, beefed-up surf-tough seams, fine-tuning attachment points and a number of other unique feathers to make this the ultimate all-around weapon of choice for kiters across the spectrum. Updates to the 2016 Rally include relocated attachment points and a slight change in geometry, which increase handling and steering speed, reduce bar pressure and bring back a feel similar to the popular 2012 version. These updates compliment the Rally’s unrivaled wind range, low-end power, hang time, upwind performance and bombproof construction that has kept Slingshot at the leading edge of the industry for the last 15 years.

The 2016 Slingshot Turbine redefines the meaning of light-wind kiting. With its Open Delta C profile, five-point cascading bridle system, mini-strut technology and optimized aspect ratio and leading edge diameter, the 2016 Turbine will not only get you out kiting in winds as low as five knots, but you’ll have a blast doing it. This combination of critical design characteristics favors ultimate efficiency and optimized control and handling, giving the Turbine its renowned low-end power and grunt while maintaining the turning speed and efficiency that makes it a supreme light-wind performer. Back by popular demand for 2016, the Turbine is offered in two sizes – 15 and 17 meter – to give riders the freedom and flexibility to fine tune their light-wind weapon of choice. The 15 meter is designed for lighter or more efficient riders, surfboard riders, foilers and slightly stronger winds, while the 17 meter has the ultimate low-end range and a bit more power.

The Wave SST (Slingshot Surf Technology) features a Compact-C canopy and compact direct-connect bridle that looks like a cross between an RPM and a Rally, but is tuned to perform exactly how you need it to in the waves. Built with significant upgrades to Slingshot’s already bombproof construction, the Wave SST is sturdy enough to take a pounding in the surf, but light enough to track magically downwind, downloop on a dime and whip across the window at the flick of a wrist. The Wave SST is equipped with a modified version of Slingshot’s revolutionary new shock-absorbing IRS bridle (featured on the 2015 RPM), which provides instant feedback and response, unrivaled stability and is condensed enough that it can’t get wrapped around wingtips if rolled in the surf. Although built specifically for surf, the Wave SST is also an outstanding kite for easy-going strapless riders and the rapidly-growing faction of foil boarders due to its incredible depower, feather-light feel and unrivaled turning characteristics. For customized performance, the kite features three trailing edge attachment points which result in more or less bar pressure and sensitivity depending on which point is chosen. With a shape that favors serious downwind drift, unbelievable turning speed even when fully sheeted-out and a feather-light feel when shredding down the line, slashing faces and bottom-turning, the Wave SST has set a new standard for what a wave kite can do for its riders.

The Slingshot RPM is the renowned all-around weapon of choice for world champion tricksters, soul-searching surfers and casual weekend-warriors alike. Returning as the flagship kite on Slingshot’s legendary lineup, the 2016 RPM is loaded with exciting and innovative features that will again place this kite at the top of the food chain and uphold its reputation as one of the most versatile and rock solid kites ever produced. Last year Slingshot introduced the Intuitive Response System (IRS) Bridle – an industry-first innovation that replaced bridle pulleys with a low-profile bungee setup that improved steering speed, response and general high-end performance. Feedback on the IRS Bridle was immediate and overwhelmingly positive. The 2016 RPM comes equipped with the same system, which gives riders a more fluid connection to the kite and gives the kite improved stability and smoother, more reactive performance. In addition to the industry-leading IRS bridle, the 2016 RPM features upgrades to its already bombproof construction, including a tougher, more durable diamond leech trailing edge and a new DP 175 Dacron leading edge and strut material. These upgrades compliment Slingshot’s proprietary tri-tech protection, making this one of the toughest, most durable kites on the market.

With a stubby, truncated nose, wide midsection and three-fin swallow tail, the 2016 Angry Swallow’s anarchic design breaks the mold of modern kite surfboards. Based on Slingshot’s T-Rex hybrid model, the Angry Swallow offers riders an unparalleled mix of stability and all-condition wave performance with a snappy, responsive and freestyle-friendly feel that only a board of its size and shape can provide. New this year, the Angry Swallow has a narrower midsection, redesigned tail and drawn-back stomp pad and insert. These changes allow for tighter, snappier turning and a more aggressive stance for riders, with or without footstraps. Although an excellent all-around board, the Angry Swallow shines in marginal wave conditions, when more traditional boards tend to struggle. With the performance of a larger board in a small package, the T-Rex design is also an excellent choice for travel. Back by popular demand for all of Slingshot’s 2016 surfboards is the three-fin setup incorporating the innovative new FCSII keyless fin system that enables riders to insert and remove fins with ease, and without the need for tools.

Unorthodox by design and radical by performance, the 2016 Slingshot Screamer appeals to the new-era of kiters who want both solid wave performance and progressive freestyle capabilities out of the same surfboard. The board’s unique shape is based on Slingshot’s T-Rex design, the most notable feature of which is a wide, snub-nose. Offered in 5’2”, 5’4” and, new to 2016, 5’6” lengths, the Screamer’s stubby shape significantly reduces front-end weight, thus making strapless airs, spins and flip tricks easier than with more traditional shapes. Meanwhile, the board’s parallel rail outline, “pulled-in” thumb tail and single-concave rocker make it a fast, stable and slashy choice for all-around wave riding. New this year, the stomp pad and tail inserts have been moved back over the fins to allow riders a more aggressive stance and attack, whether riding strapless or strapped-in. A 5’6” length was also added to the lineup, providing an excellent option for lower wind, smaller swell or larger riders.

Built to satisfy the high demands of elite Slingshot team riders, Sam Light and Karolina Winkowska, the Refraction Pro Model provides the type of explosive performance and field-tested consistency that the hardest-charging kiters demand. Modeled from Slingshot Wakeboarding’s popular Whip board and then tailored to the specific needs of both Sam and Karolina, the Slingshot Refraction was born. Garnering DNA and influence from the most progressive riding from each aspect of kiteboarding, the Refraction is the peak of true twin tip performance. Features include a progressive rocker profile (2.4 inches), subtle V spine, Slingshot’s proprietary Fasttrack mounting system, and inverted NACA TECH channels for ultimate pop and edge control.

Slingshot blends high tech manufacturing with classic wood core construction in the 2016 Slingshot Vision. This freeride and freestyle twin tip is built around a Pacific Albus wood core, which gives the board unmatched flex and resilience, and is then infused with Slingshot’s exclusive manufacturing techniques that include laser cut NACA TECH channels, a rugged DURA base, Fusion Sidewall, Chined Rails and an inlaid Fasttrack mounting system. These features, and the board’s elliptical concave and continuous rocker shape, combine to create an unparalleled all-around freestyle board that accelerates through the water with ease, cuts upwind efficiently, provides insane pop and soft landings and is durable enough to withstand abuse of the world’s hardest-charging kiters. Like all of Slingshot’s twin tip boards, the Vision is built proudly in the United States with high-quality materials sourced from the Pacific Northwest. Construction includes an all-wood Atomic Core that provides outstanding flex, performance and durability. Slingshot’s exclusive Fasttrack mounting system is integrated into the core of the board and gives riders ultimate control when mounting footbeds or boots.