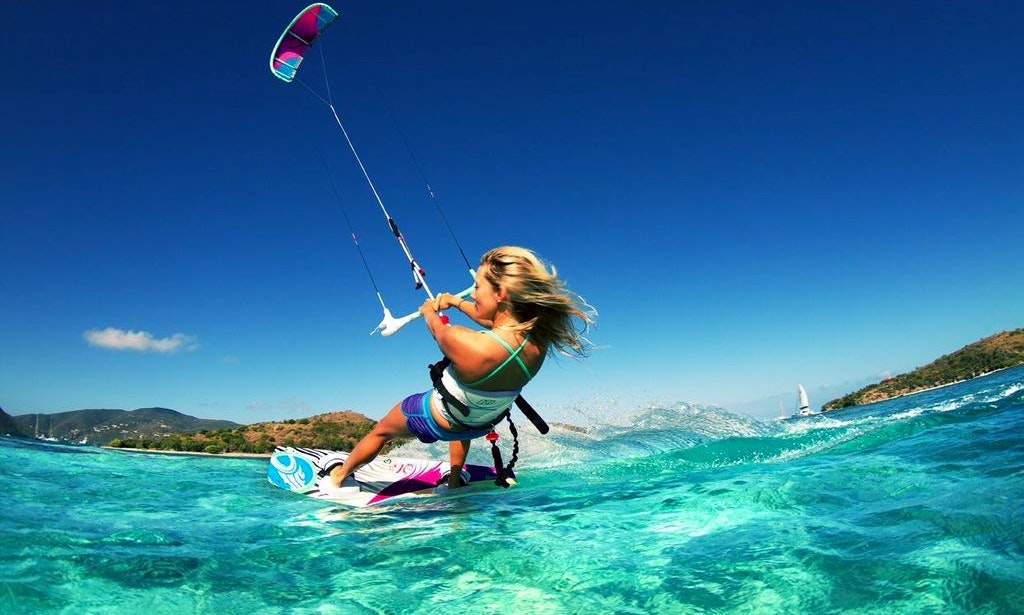 All three islands that make up the Cayman Islands; Cayman Brac, Grand Cayman and Little Cayman are just a short flight from Miami and even closer to Cuba. The kiteboarding happens on Big and Little Cayman in picture perfect, warm, tropical Caribbean waters with reliable trade winds making this an ideal spot for comfortable cruising and easy progression.

In summer you’ll get light southeasterly trade winds and in winter the wind blows from the northeast. Winter’s the key kite season with the strongest trades and Cayman’s hairdryer winds make the waist-deep lagoons a perfect place to learn and really progress.

There are a range spots on Grand Cayman that the local kite schools will take you to, but the main kiting location is Barkers Beach in West bay on the edge of Barkers Nation Park. There you’ll find sandy beaches, little to no crowds and some of the most incredible turquoise water that you’ve ever seen with plenty of space in a large protected lagoon, surrounded by the biggest barrier reef in the Caribbean.

You can find some fun ramps on a windy day and the swell can get quite big if the wind gets strong with some wave riding to be had on the outside. This coastline is ripe for downwinder exploration too and a trip from the east side of the island round to the west side, where Barkers Beach is situated, is always worth experiencing.

The kitesurfing on Little Cayman happens at a spot called South Hole Sound where you’ll find similarly safe and enjoyable conditions. There’s a reed surrounding the bay that keeps the water nice and flat close to shore. Like Barkers Beach, it’s mainly standing depth but the South Hole Sound is southeast facing, so well set up for the summer southeasterly trades, while the winter northeasterly winds blow cross-shore from the right. There’s a sandy beach with plenty of launching space, but watch out for shallow sections of reef towards the edge of the bay and the jetty that juts out from the middle of the beach.

Conditions here are cruisy! Nine to 12 metre kites are usually the order of the day during the winter season unless a front blows through and the spots on Grand Cayman and Little Cayman are ideal if you’re a total beginner, or if you want to push your unhooked tricks without battling gusty, punchy winds. Winds are lighter in summer but it blows at around 10 knots on at least 90% of days, so if you’re into foiling you can still be pretty regularly. Hovering over crystal clear Caribbean waters is an absolute joy on a foil, though if you’re heading out at Barkers Beach or South Hole Sound on a foil with a full-length mast then just be aware of the shallow coral depth in some areas.

The average year-round temperature is 28 degrees Celsius so warm clothing isn’t necessary and the sea temperatures don’t vary much beyond 25 degrees Celsius. A rash vest and boardies/bikini will be plenty of protection. Like everywhere in the Caribbean, the temperature doesn’t cool off that much at night either.

There’s an array of accommodation in the Cayman Islands, most of which is pretty luxurious, with most of them situated along Seven Mile beach, which is about ten minutes from the kite schools at Barkers Beach.� You can also book beachfront villas or stay in dive lodges. Being such small islands, you’ll never be far from the beach.

There are over 200 restaurants on Grand Canyon alone. The Cayman Islands are one of the top diving destinations in the world with 365 dive sites to suit divers of all experience levels. If it is not windy then there’s still plenty of stuff to do! Go SUPing, surfing, kayaking or take a boat trip out to Stingray City – a sandbar where you can swim with wild stingrays.

We hope you’ve enjoyed this blog, thanks from the S2AS team!