Core kiteboarding is a German kitesurf brand based in Fehmarn which stands for quality and durability. Since 2001, Core has been making premium kitesurf Kites, boards, bars and surfboards with German quality. The yellow, black, white design is characteristic of the Core products and immediately catches the eye when you do a spot check. The kite range of Core currently consists of six kite series (XR, Nexus, GTS, Section, X-Lite and Impact) suitable for all riding styles from wave riding to extreme wake style. The Core kites and kiteboards stand for German quality. The Core kites are super solid in the air and the boards ride like crazy.

In the late 1990s, founder and CEO Bernie Hiss set up one of his first prototype four-line kites and went kitesurfing on the water. But, surprisingly, this was not the product he would start with in the kitesurfing market. In 2001, Bernie Hiss started the production of kitesurfing twintip boards in Fehmarn under the name Carved Customs. In the building where Core and Carved are still located today. Carved became later part of the business of Bernie Hiss, Hiss-Tech. Just as Bernie would do later with Core kiteboarding.

In the spring of 2007, Bernie came with his first Core / Carved kite, the Carved DNA. The focus in the development of the Core Kites back then was already on performance, comfort, safety and quality. And to this day these are the core values of Core kiteboarding. In the years that followed several different kites were added to the kite range and even the first Core kite, the Riot, disappeared from the range. The Core kiteboarding range currently consists of six kites: XR6, Nexus, GTS5, Section 2, X-Lite and Impact 2.

In addition, a separate kiteboard and surfboard line under the name Core has been developed. The kites and kiteboards from Core are for everyone from pro to beginner and wave rider to kiteloop kings. 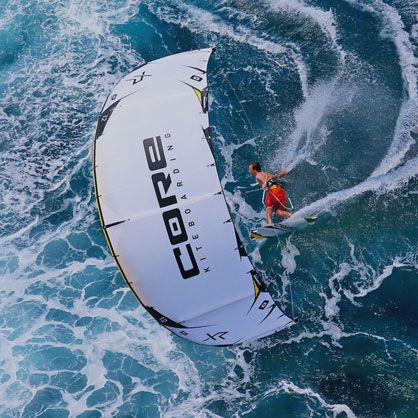 Core is now one of the leading kite manufacturers in the world. On every spot you see a Core kite with the characteristic black, white, yellow colour combination. The kites are incredibly stable in the air and are designed by the best kite designers on the market. In addition to the Core team, the Carved team plays a major role in the design, development and production of Core kitesurf kites. In this way, a large team was created with a lot of technical knowledge. The technical team works with the best kitesurfers in the world such as Linus Erdmann, Willow River, Joshua Emanuel and Steven Akkersdijk to match the kites to the high demands of the team riders. The Core kites are being developed and initially tested at Core’s headquarters in Fehmarn. Fehmarn is a small sunny island in the Baltic Sea. The wind often blows and Core’s office is just 10 minutes from the beach the perfect place to test kites. Core and Carved boards are made in Germany and Austria. The Core kites are made in Sri Lanka with European quality standards. In a short time, Core has grown from a small kitesurfing brand in Germany to one of the largest and best kitem brands in the world.

You don’t have to be pro rider to appreciate the incredible allround performance of the Fusion. Nor do you need to be a gifted freestyler to dig the Choice. Anyone can experience the magic of 60° biaxial Cartan carbon fiber, the intoxicating power of a milled Paulownia wood core, and the comfort of CORE’s unbelievably adjustable Union Pro straps.

Core Kites are strong in all disciplines yet supercharged in one. Where universality meets specialty.