Having just had a week of epic snowfall in Europe, it’s time to hit the hill and hunt for powder, but are you taking the right kit with you?

We catch up with Netherland-born brothers Rubby and Danny, who have worked for the rebellious brand Bataleon for over 15 years, to find out why this is the season to try the kit everyone’s talking about.

Bataleon is the dark horse of the snowboarding world. Jorgen Karlson, a biophysicist from the Netherlands, had a crazy idea back in the 90s to create a snowboard with a base that was more 3D than flat. He took his idea to the snowboarding companies of the time, but was laughed out the door. Undeterred, Jorgen went to the top Norwegian snowboarders and designers to set up their own brand. It was the perfect collaboration between science, art and snowboarding.

“He’s a bit of a mad scientist.” Rubby said, talking on loudspeaker as he and his brother drove through Austria for a Bataleon conference. “He studied aerodynamics and couldn’t understand why no one else had thought of his triple base idea. Snowboards used to be made by hand, which naturally led to more of a carved 3D finish. But as it grew more popular, boards were made en masse by ski companies, and basically became a large, flat ski. Jorgen changed that.”

Now, Bataleon are the only company to make snowboards with their Triple Base Technology, which means you can start a turn easier, edges don’t catch as much, and there’s more stability at high speed, whilst retaining a playful and forgiving feel. 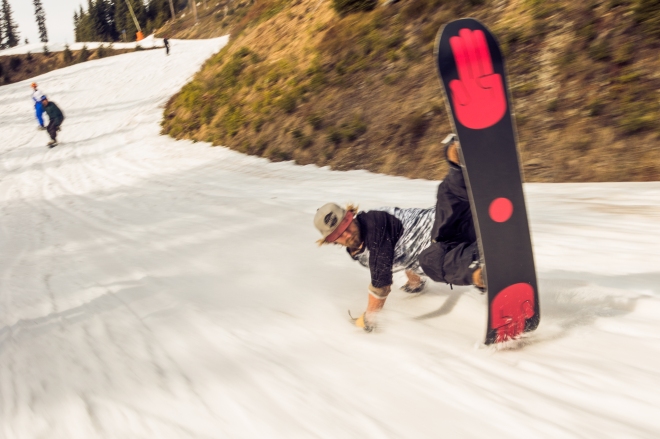 Danny, who is the Art Director and Part Owner, came up with the now-iconic three fingered salute logo – a nod to the 3D Technology, and the Norwegian misspelling of bataleon. He met Jorgen at their first trade show in Norway, and as soon as he saw the different shapes, he was hooked.

“The first time I went on a Bataleon board, I was already a sponsored rider and pretty loyal to that brand, but I thought I’d give it a go.” Danny said. “It felt really floaty and loose, like a surfboard. It was much faster too, and I hit this jump with too much speed, but somehow it corrected itself on the landing and saved me – I was immediately sold and never tried another board.”

Like all the best brands, Bataleon grew from word of mouth. But not just in Europe, the word was spreading to Canada, Japan, Australasia, South America – everywhere the Bataleon Team went, they left a couple of snowboards with the best pros in the country, and the brand caught like wildfire.

“When we started, we were the dudes with the weird shaped boards.” Rubby laughed. “Now Triple Base Technology is patented and we’ve got these boards into almost every store – when only just a few years ago, just the idea seemed crazy. I think it’s hard in Snowboarding to tell what is innovation and what is marketing.”

Some of the biggest names in Snowboarding history have joined their small army of winter warriors. Icelandic freestyling legend Halldor Helgason loved the Triple-Base Technology so much, he co-founded Lobster, a line of snowboards in partnership with Bataleon. The Lobster Halldor Pro is already a favourite amongst the jump-loving park riders.

But Bataleon isn’t just for the sponsored superstars and powder-hounds. This brand has perfected their shapes for on pistes, park and backcountry, from beginner to pro. Their Austrian technicians have spent 16 years constantly innovating the Triple-Base Technology, and whilst every Bataleon board is hand-finished with camber and triple base, there are 30 different models, each in 6 – 8 sizes, with various riding qualities. Check out the Bataleon Magic carpet the powder hungry twin.

“This is the season to ride!” Rubby shouted down the phone, whilst their technician, Ronald, cheered in the background. “Winter is back! The powder is going to be epic – everyone has been forecasting it.” Their confidence perhaps comes from driving through snow-laden Austrian villages for 13 hours.

As well as boards to suit every rider, Bataleon have expanded to producing their own brand of bindings, constantly pushing the boundaries of prior designs with everything they make.

“We always want to come up with something new,” Danny said. “That’s how Bataleon started: doing something no one had done before. We want to continue that in everything we make.”

Ride with the snowboarding rebels this season and try Bataleon Snowboards

Do you own a Bataleon Snowboard? Send us your images we want to see you on it shredding.